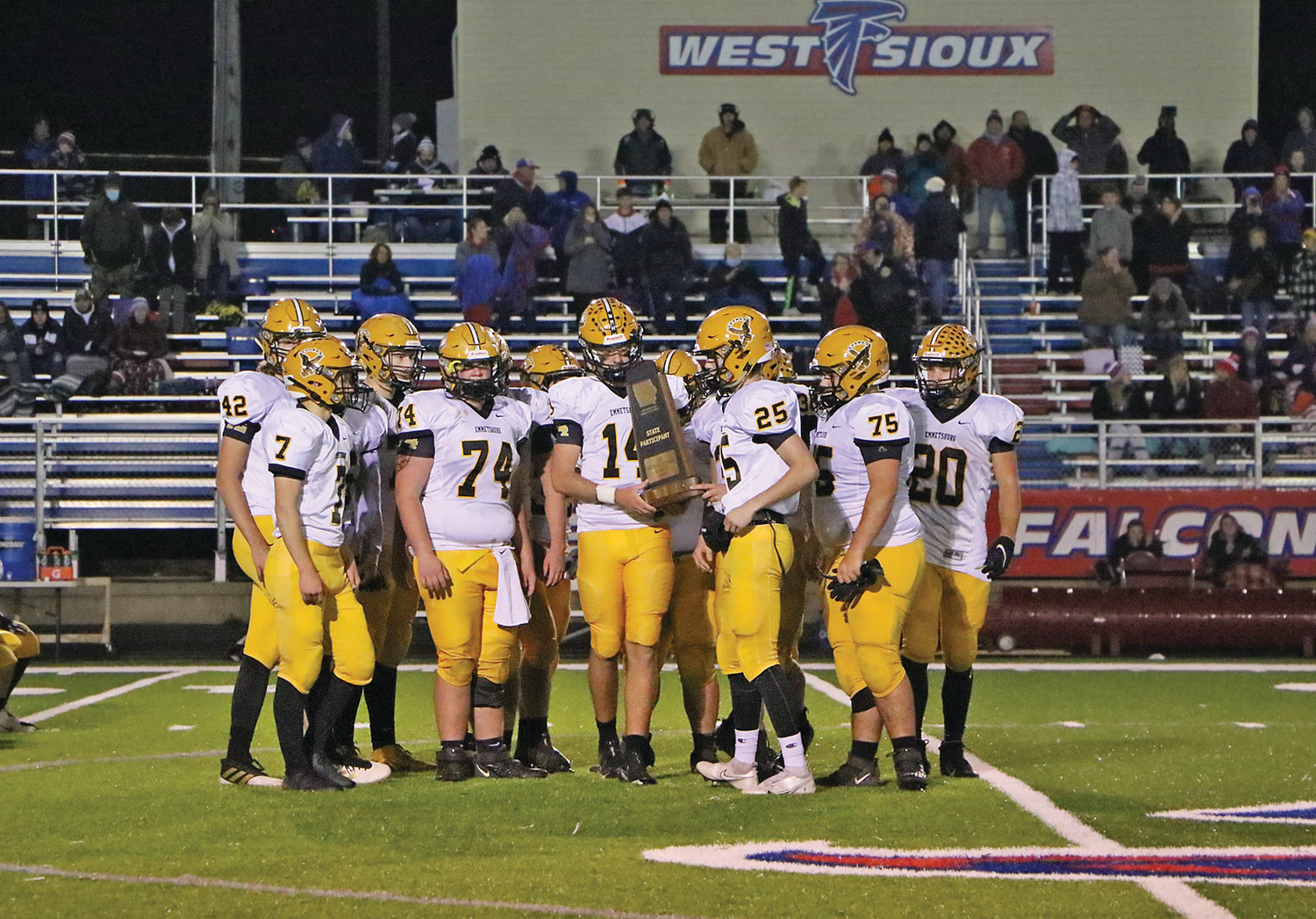 A CLASS ACT -- The E-Hawks would fall to West Sioux 35-16 in Friday night’s Class 1A third round playoff contest. Pictured above, after a great 7-2 season, Emmetsburg accepts the IHSAA participant trophy following Friday’s game.
Posted Tuesday, November 3, 2020 10:33 am
by Joseph Schany

HAWARDEN -- An outstanding postseason run would come to a close for the Emmetsburg E-Hawks Friday night, falling 36-15 to the West Sioux Falcons in Class 1A third round playoff action. For Emmetsburg, the season ends at 7-2 overall, 5-2 in Class 1A district play.

Friday's setback would get off to a rocky start for the E-Hawks as the Falcons would run up a score of 14-0 in the first quarter with two touchdown passes from inside the red zone from quarterbacks Carter VanWyhe and Dylan Wiggins.

With the second quarter underway, quarterback Ben Dunlap and the Emmetsburg offense would piece together a promising drive using the running power of Cole Shirk and Colby Weir, along with crucial offensive blocks, and carry the ball to the Falcon 20-yard line. However, the E-hawks would stall after losing yardage on a 4th & 5 run attempt to force the turnover on downs.

The subsequent West Sioux possession would see the Falcons score another touchdown on a Wiggins 51-yard keeper to bring the score to 21-0 with six minutes to go in the half.

Starting on their own 25-yard line after a Lex Kassel 20-yard kick return from the 5, the E-Hawks would fight their way to the 37-yard line with short runs from Shirk and Weir. On 3rd & 9, Weir would find open field, picking up 22 yards and entering Falcon territory. A Dunlap 12-yard keeper would be followed by another Weir burst for 14 yards to set the E-Hawks up at the 3-yard line. On 1st and goal, Weir would dive into the end zone for the touchdown. On the next play, Emmetsburg would pick up two more points on a Dunlap keeper to bring the score to 21-8 with 1:54 left in the half.

Following the Cade Jacobson kickoff, the West Sioux offense would find success through the air on a Wiggins 52-yard pass from the 36, placing the Falcons at the Emmetsburg 12-yard line. However, on the very next play, Wiggins would be picked off by Kassel at the 2-yard line.

With their back against the end zone the E-Hawk offense would struggle to move the ball, leading to a 4th & 5 punt attempt. During the attempt, a dropped ball after the snap would result in an intercepted Dunlap pass which was carried into the end zone for the Falcon touchdown. West Sioux would then complete a two-point conversion to enter halftime up 29-8.