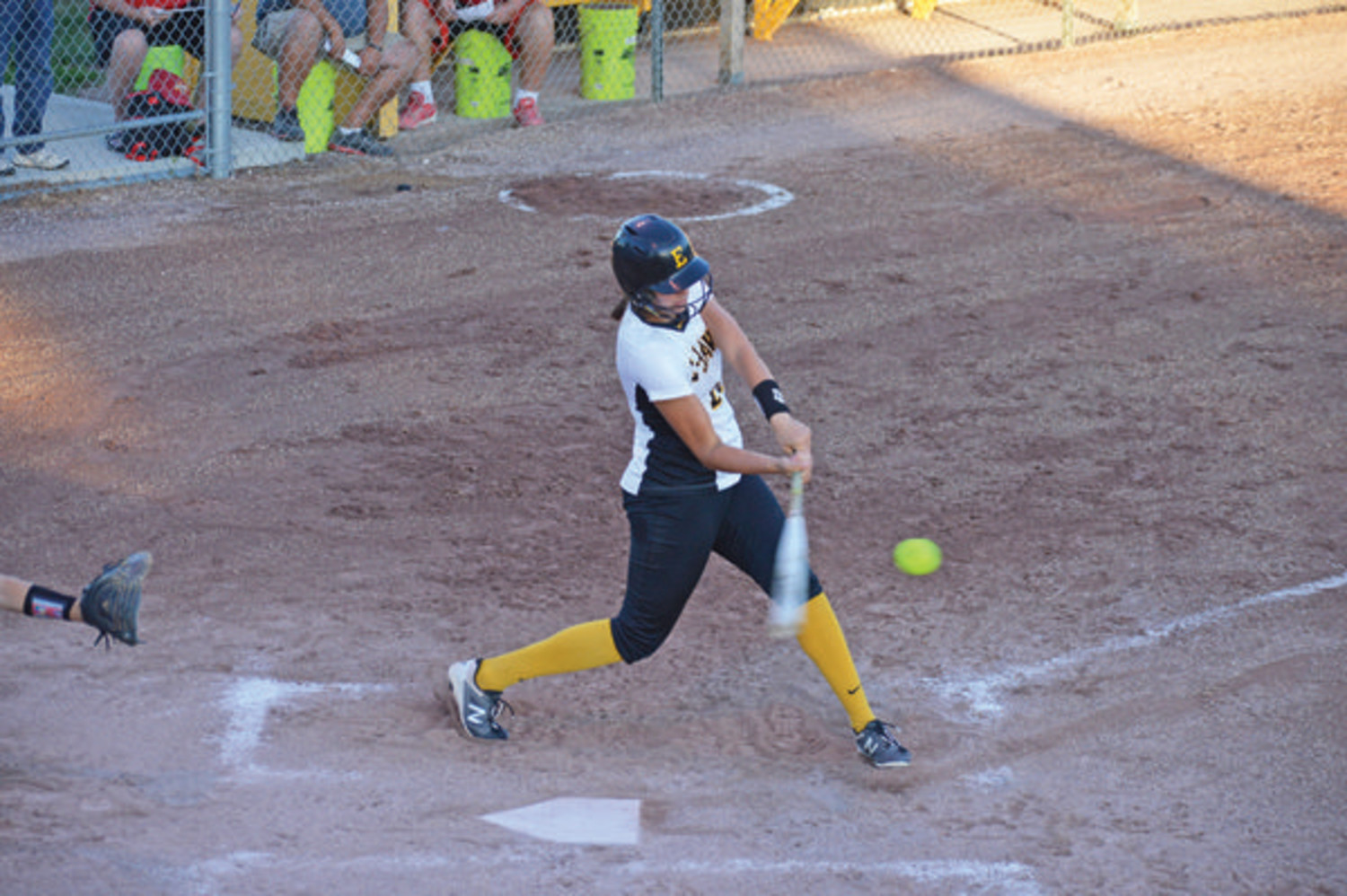 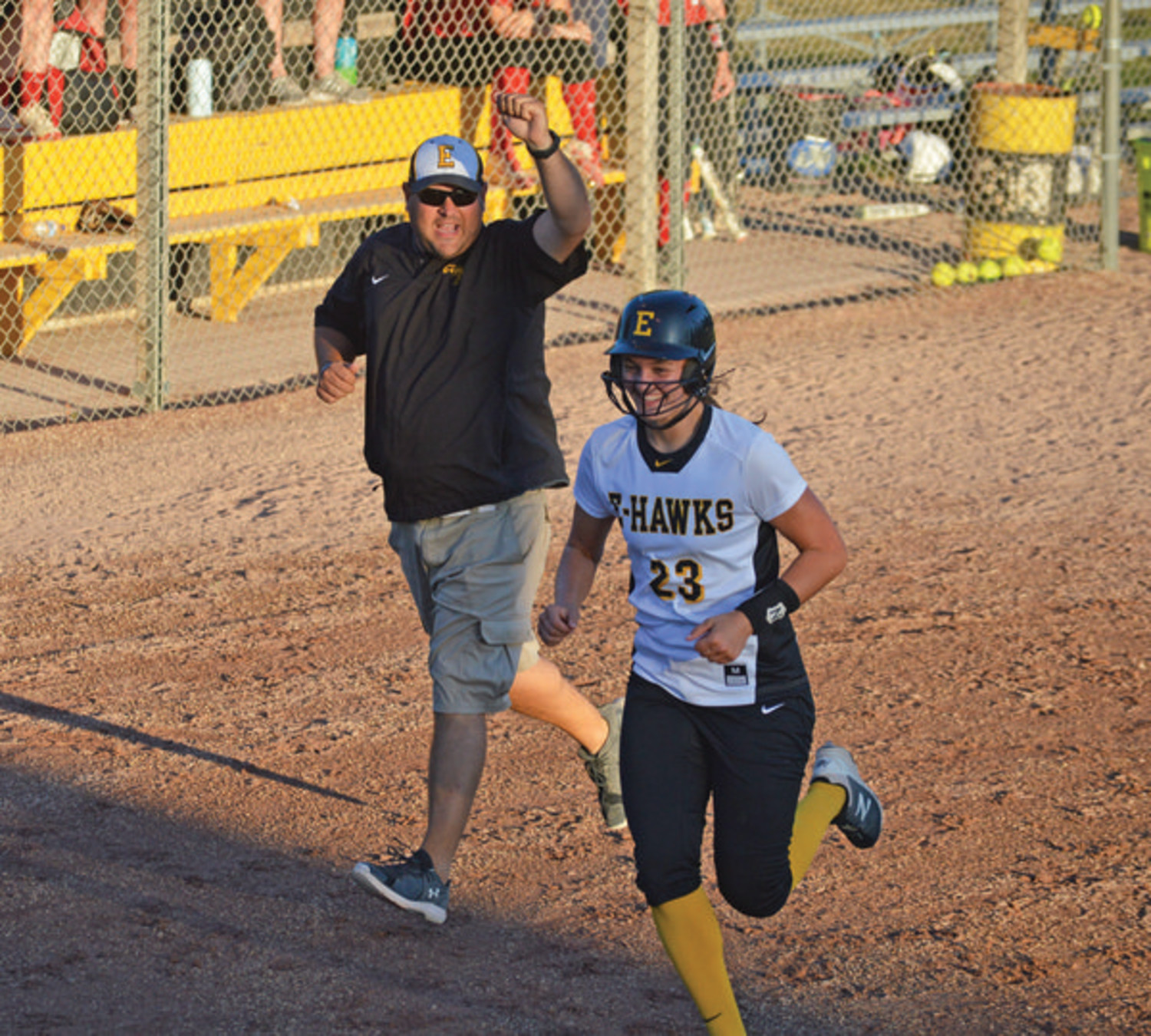 IT’S GONE! - Pictured above, Molly Schany smashes a long home run during Wednesday night’s 11-1 Lady E-Hawk win over East Sac County to close out the contest in the fifth inning. Rounding the bases, Schany was joined in celebration by head coach Travis Birkey. Schany went 2-for-2 at the plate during the game. --Joseph Schany photo 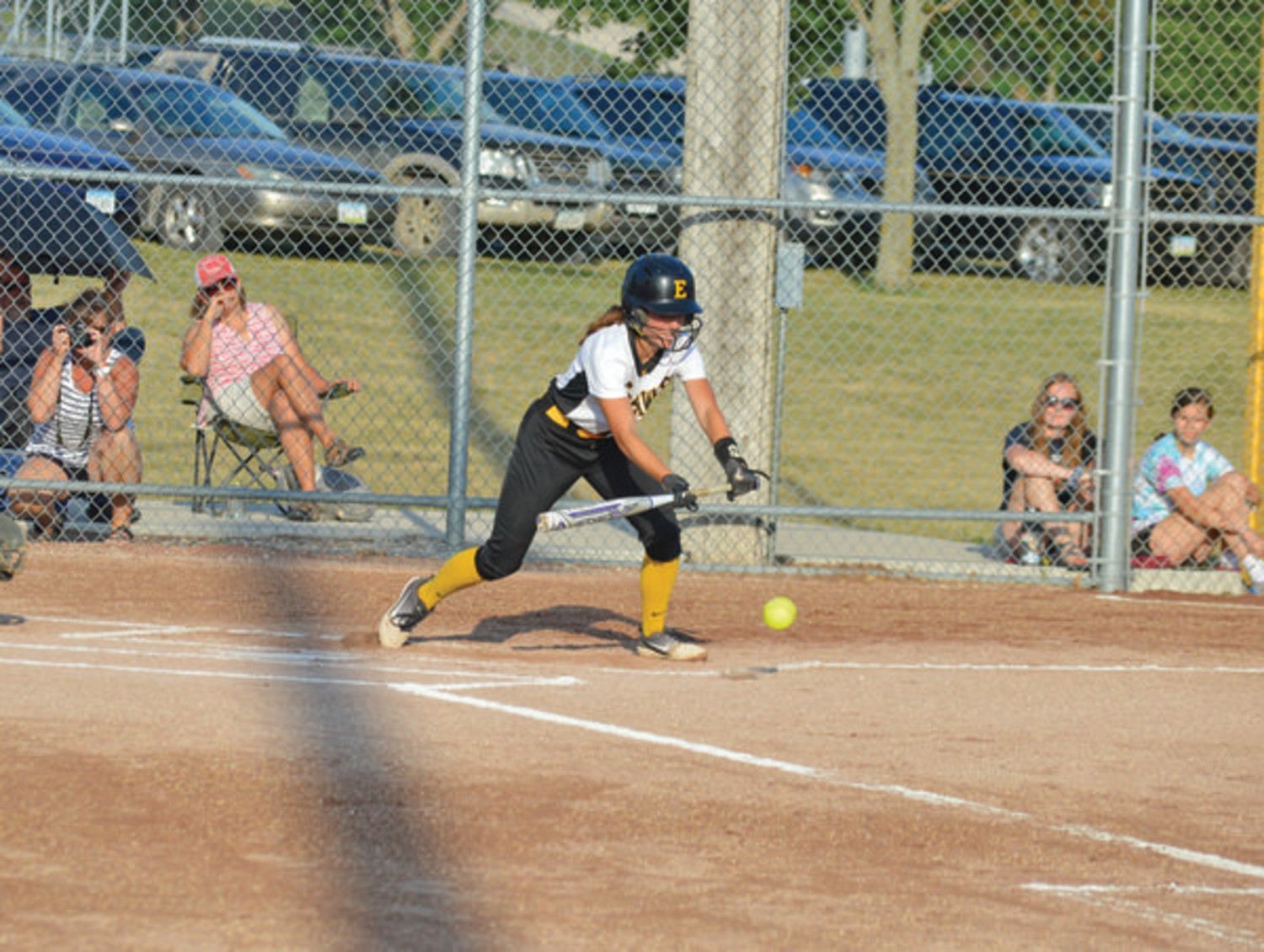 STRONG LEADER - At left, senior Lindsay Carter had a brilliant performance during Friday’s 12-0 shutout win over Manson-Northwest Webster, going 3-for-3 at the plate while pitching a no-hitter and striking out three batters. -- Joseph Schany photo
Previous Next
Posted Tuesday, July 21, 2020 12:00 am
by Joseph Schany

In the Class 2A Region 5 opener against East Sac County on Wednesday night, the Lady E-Hawks would come alive in the second inning, scoring four runs on singles from Lindsay Carter, Molly Schany, and Abbie Schany.

The bottom of the fourth would see Emmetsburg put six more runs on the board. A Macy McAllister hard ground ball single to right field would send Carter across the plate, while a Presley Heinrichs center field burner would allow Molly Schany and McAllister to score. Raegen Swanson would also pick up a point after scoring on a wild pitch to Heinrichs. A grounder to third base from Cheyanne Fries and a Carter walk would also send runners to home to end the inning at 10-1.

One run away from the 10-point mercy rule, Molly Schany would step up to bat and close out the contest with an exclamation point in the fifth inning, smashing a center field fly ball over the fence for a home run and the Emmetsburg victory.

The Lady E-Hawks racked up 11 hits throughout the game. Heinrichs led the girls with three hits, going 3-for-3 at the plate, while Molly Schany collected two on the night.

In the pitcher's circle, Carter allowed five hits with just one run, striking out six and walking zero.

The 12-0 shutout victory would be led by an outstanding performance by Carter on the rubber, pitching a no-hitter while striking out three.

McAllister would get the ball rolling in the first, knocking a hard grounder to center field to send Carter and Swanson in for the score, while on the next at bat, Abbie Schany would score on a Heinrichs sacrifice fly. A Brie Madden line drive to left field would bring McAllister home to end the inning up 4-0.

In the second, McAllister would again crush a ground ball single, sending Carter in for the run, followed by a right field line drive by Heinrichs and a Madden fly ball to center field to give Emmetsburg the 9-0 lead. Fries would launch a double to center to allow Madden and Emma Auten to score, and Carter would nail a fast grounder to center field to send Fries home and give the Lady E-Hawks 12 points to finish the second inning.

A quick three up, three down top of the third would close out the contest for the girls.

Emmetsburg would pick up 10 hits on the night. Carter would lead the team, going 3-for-3 at the plate, followed by McAllister and Madden, each going 2-for-2.

The win sent the Lady E-Hawks to the Class 2A Regional Final against Central Springs on Monday night, the outcome of which is unknown at press time