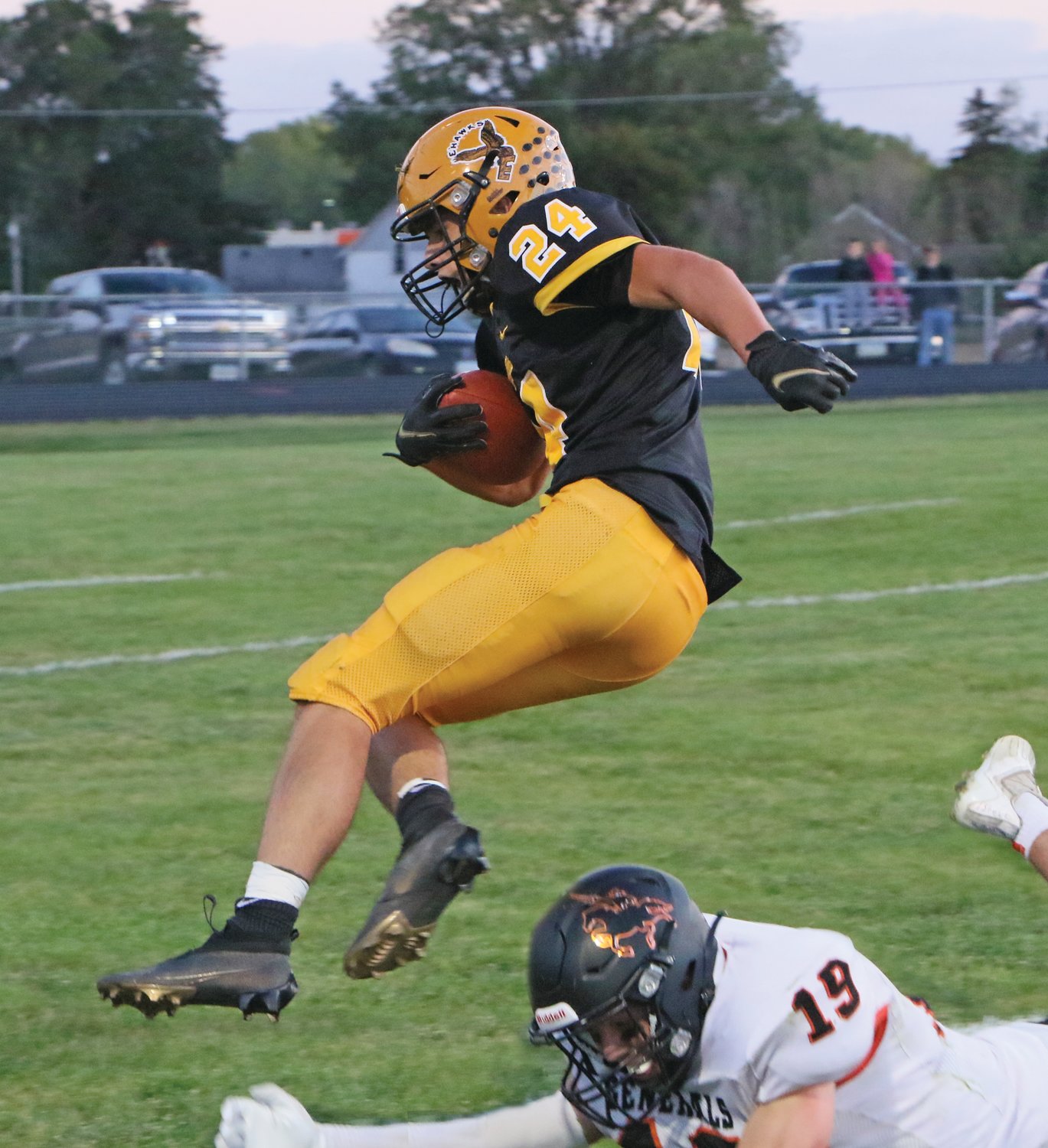 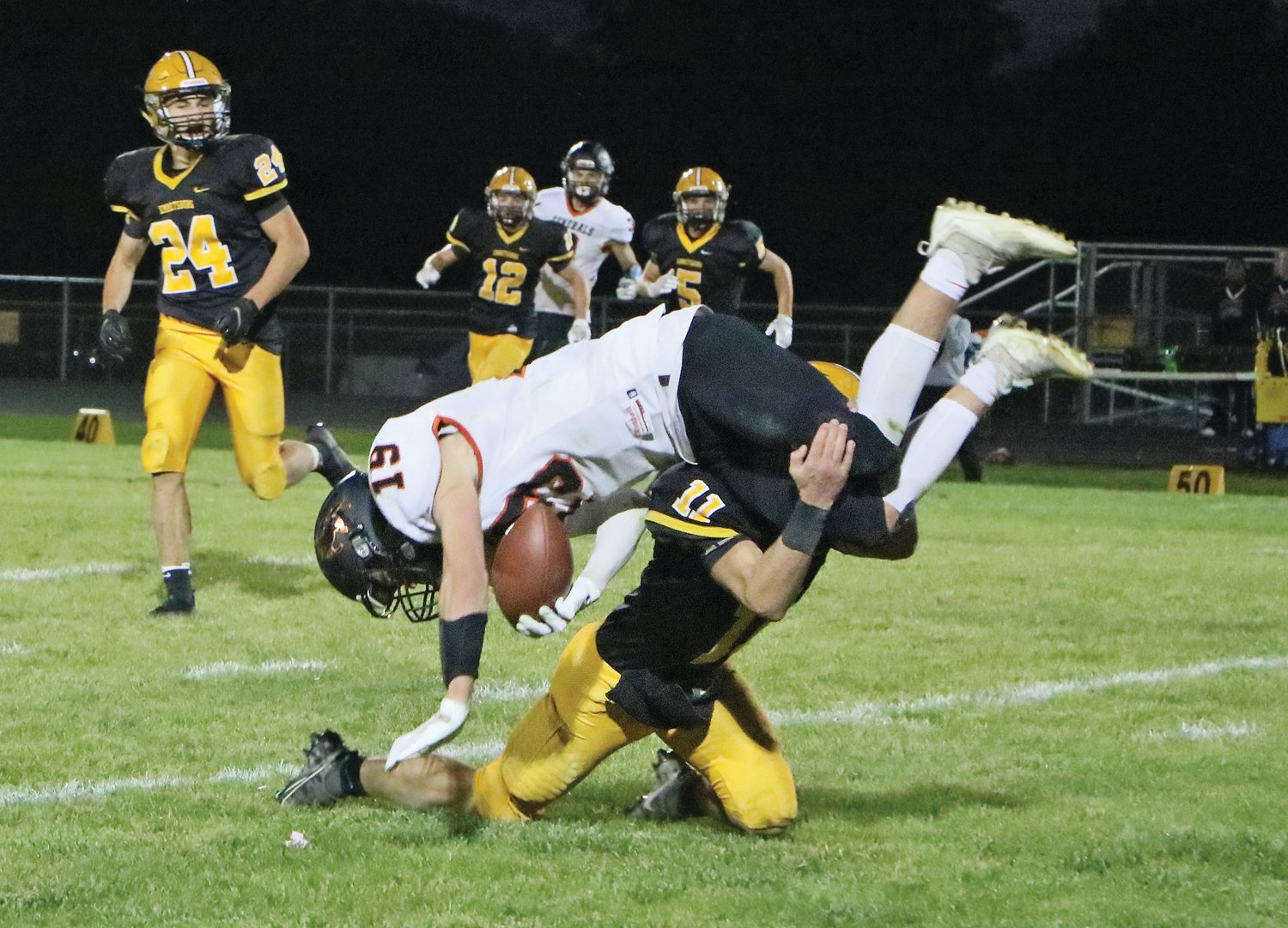 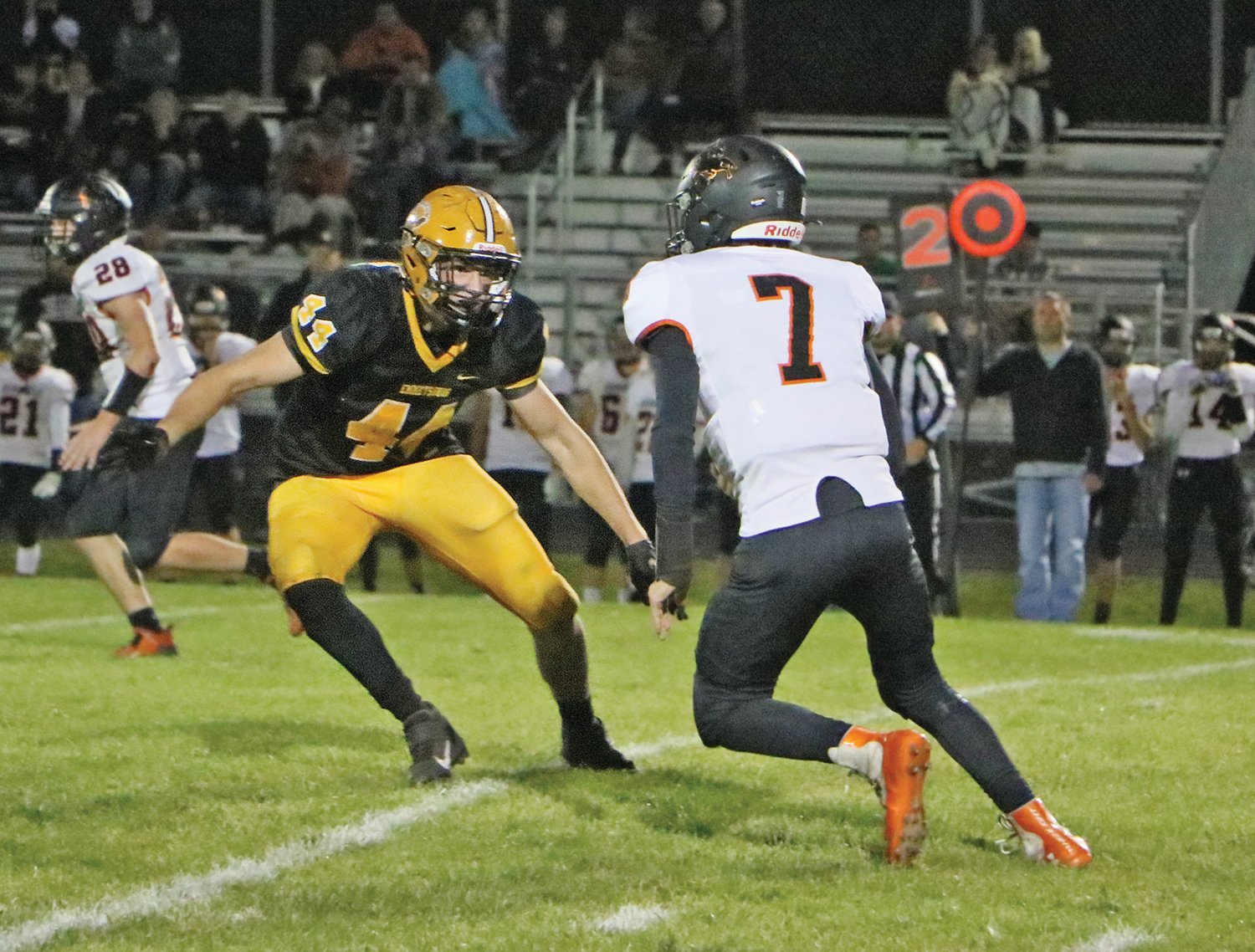 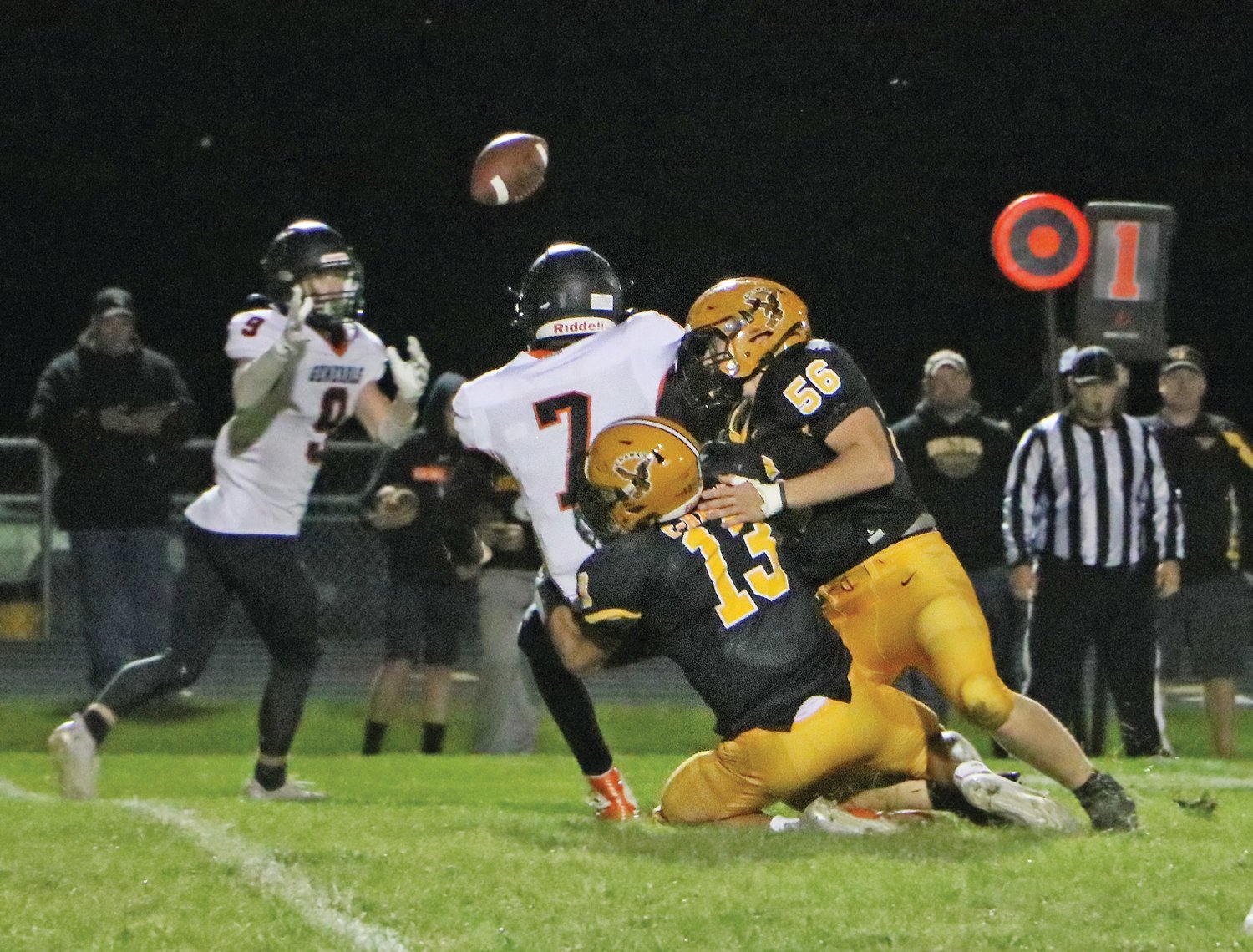 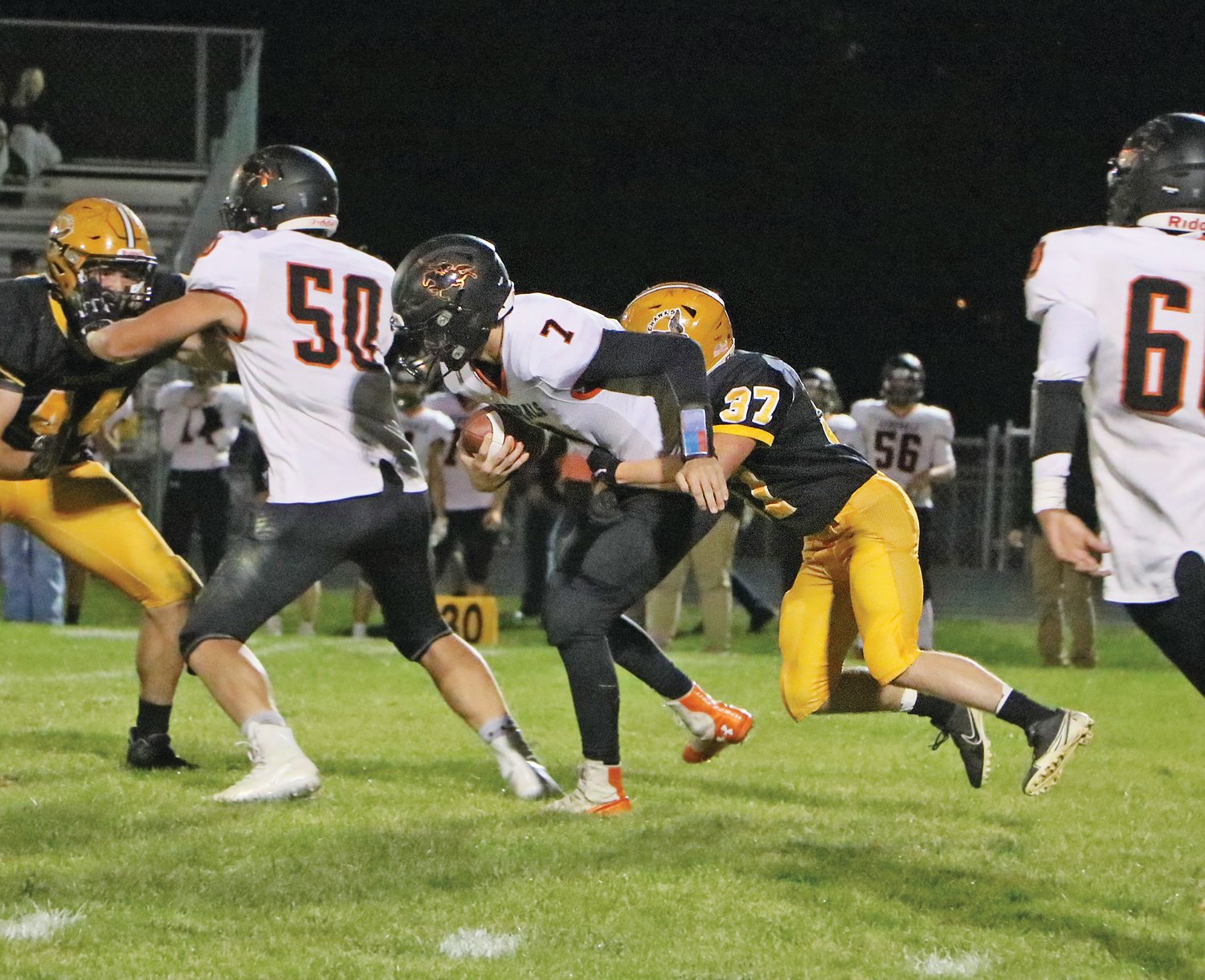 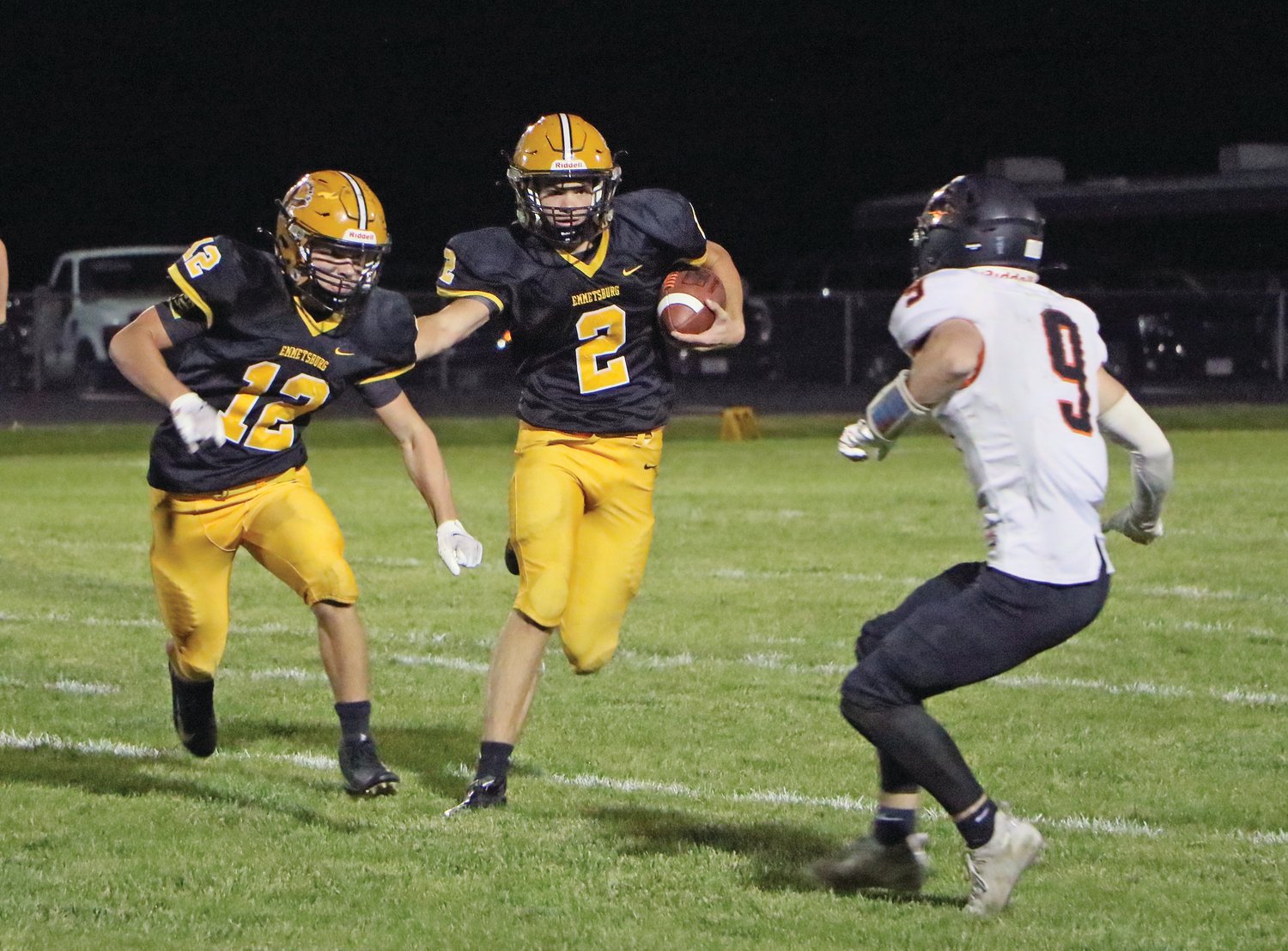 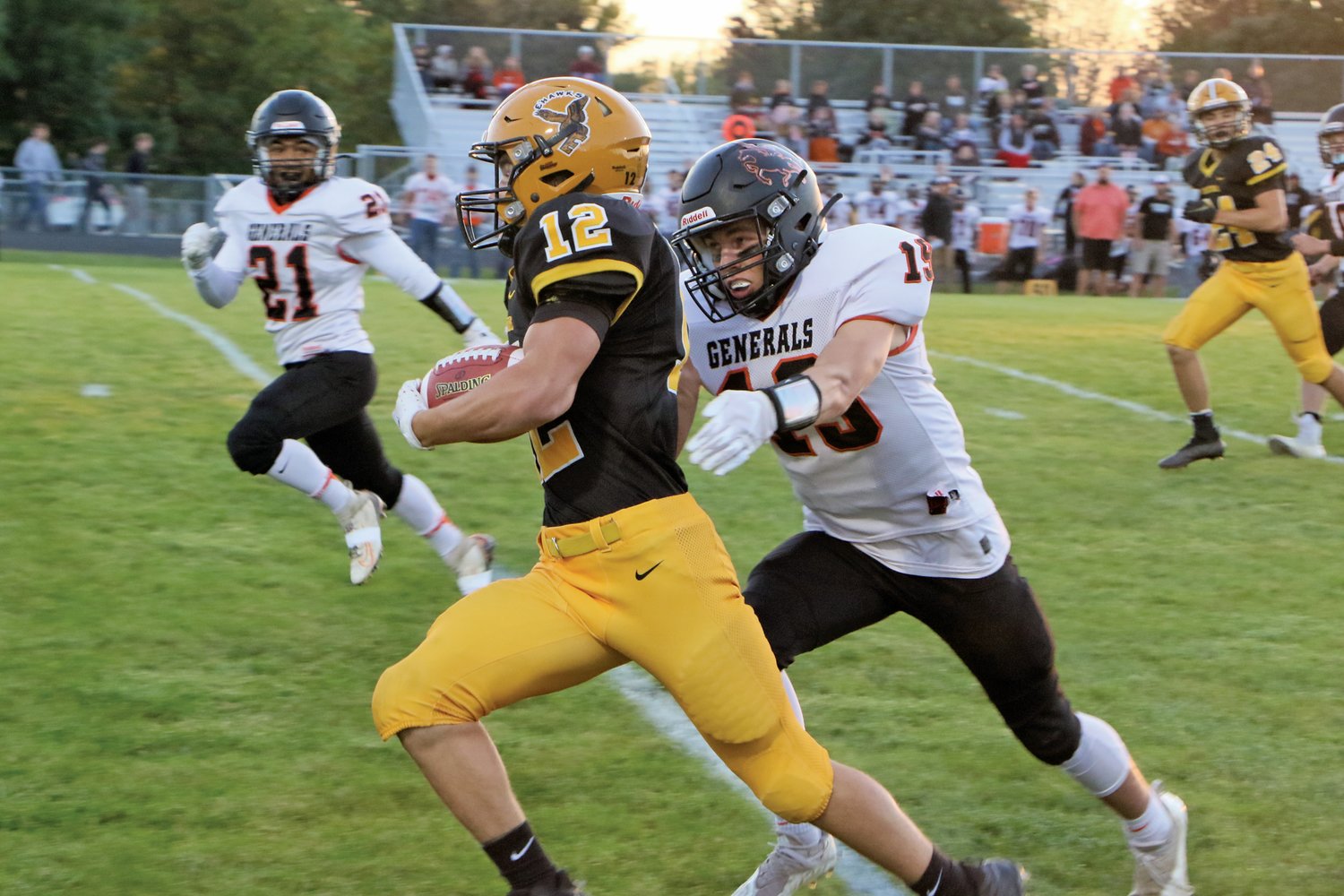 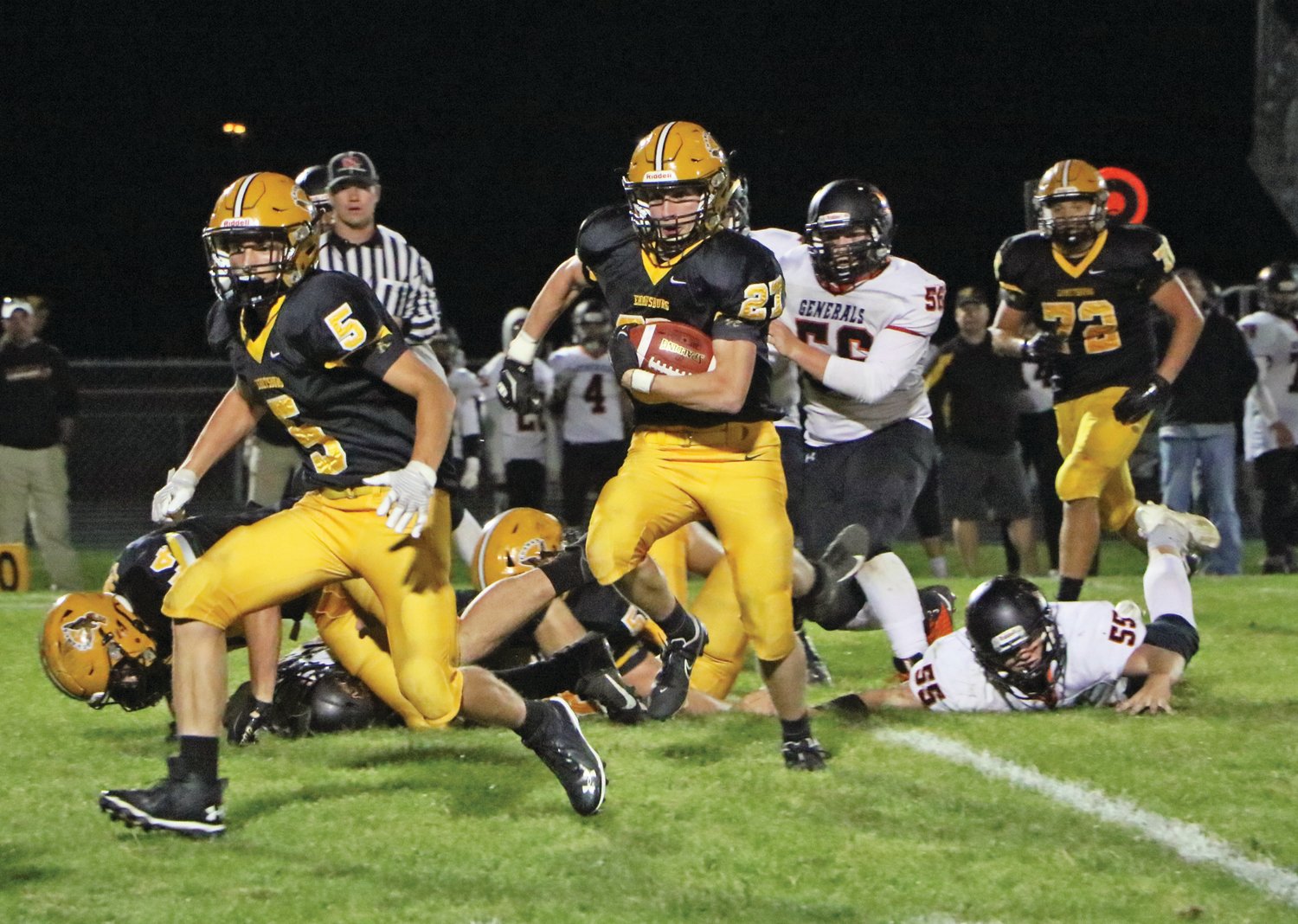 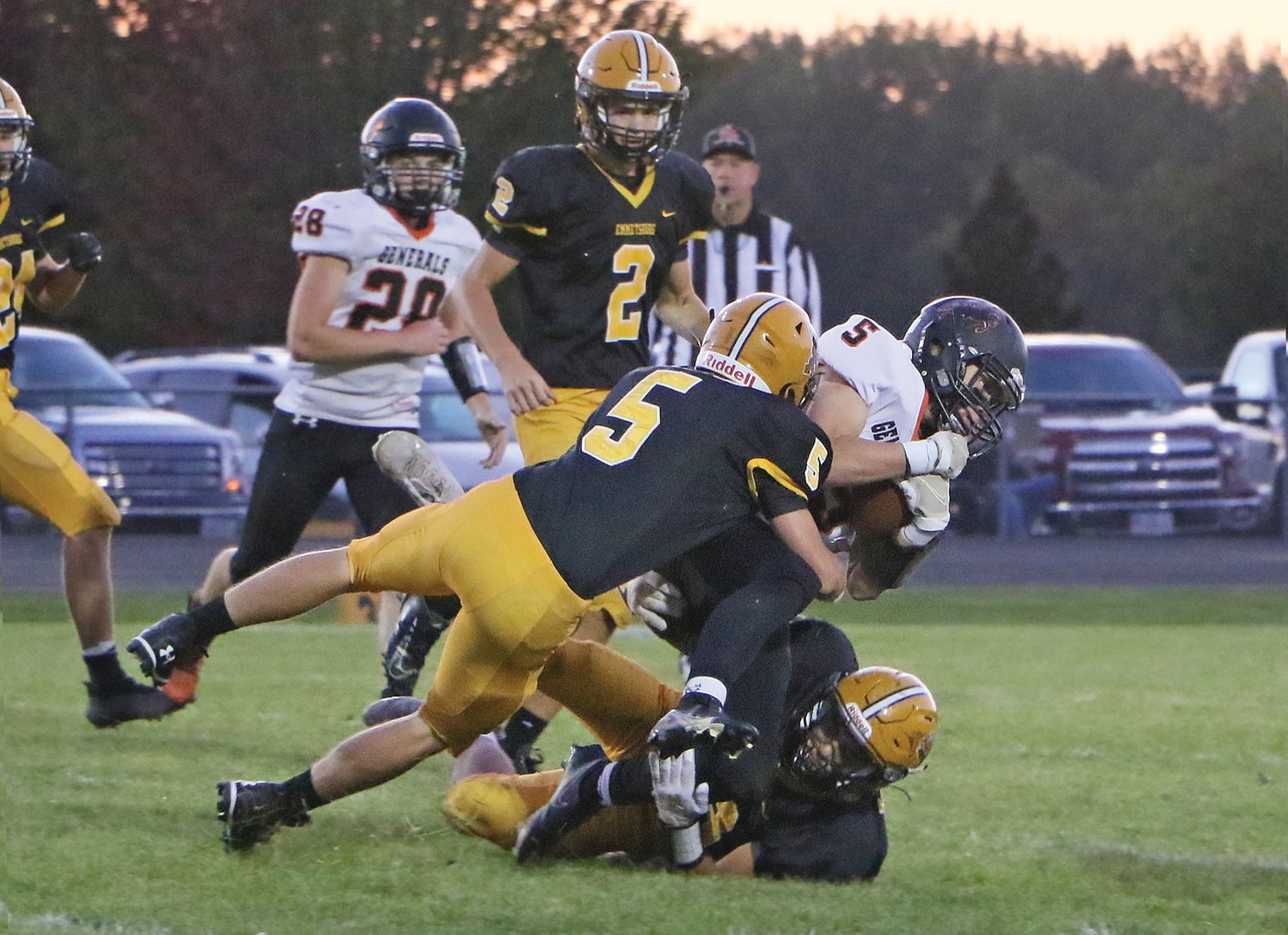 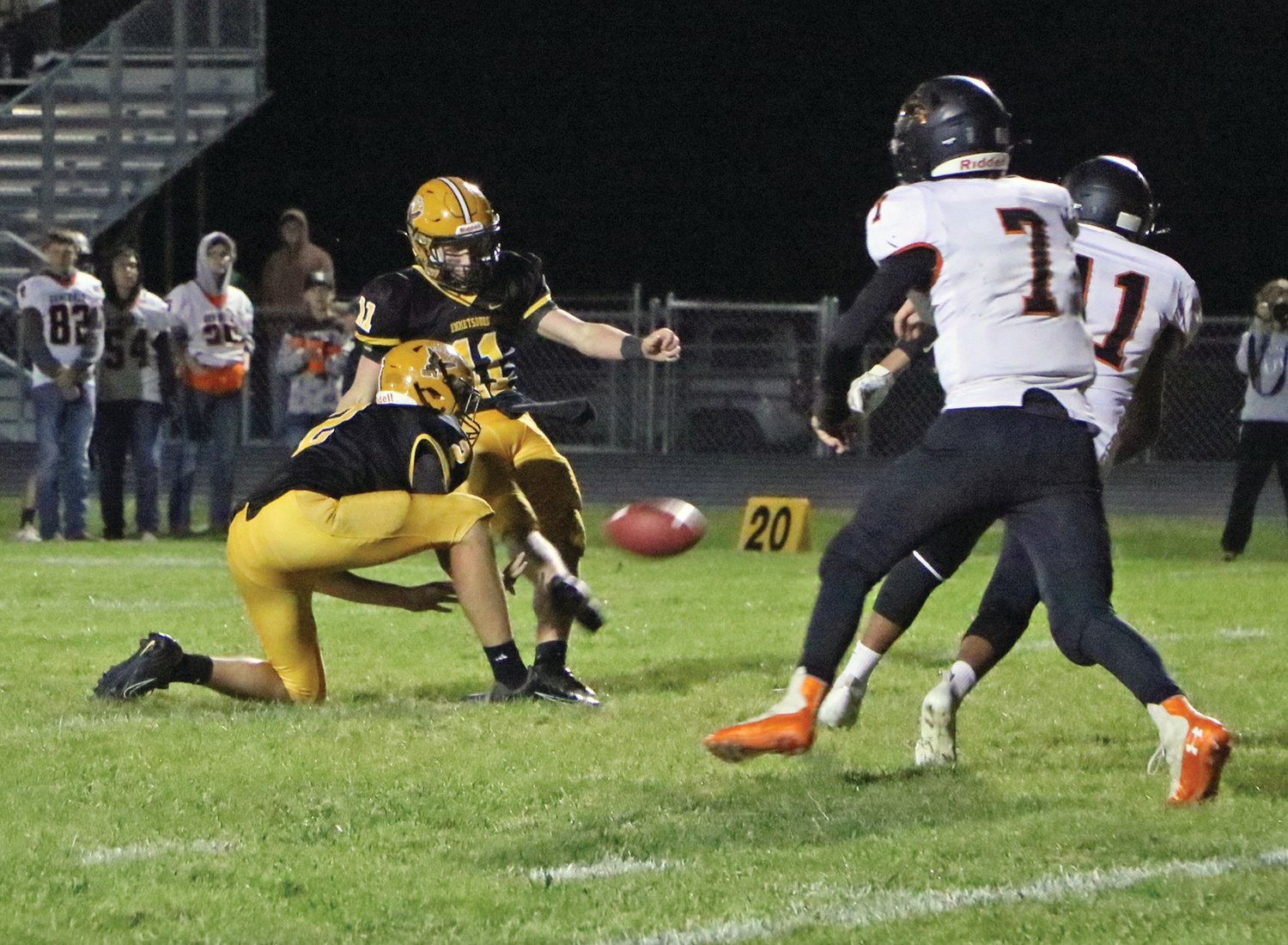 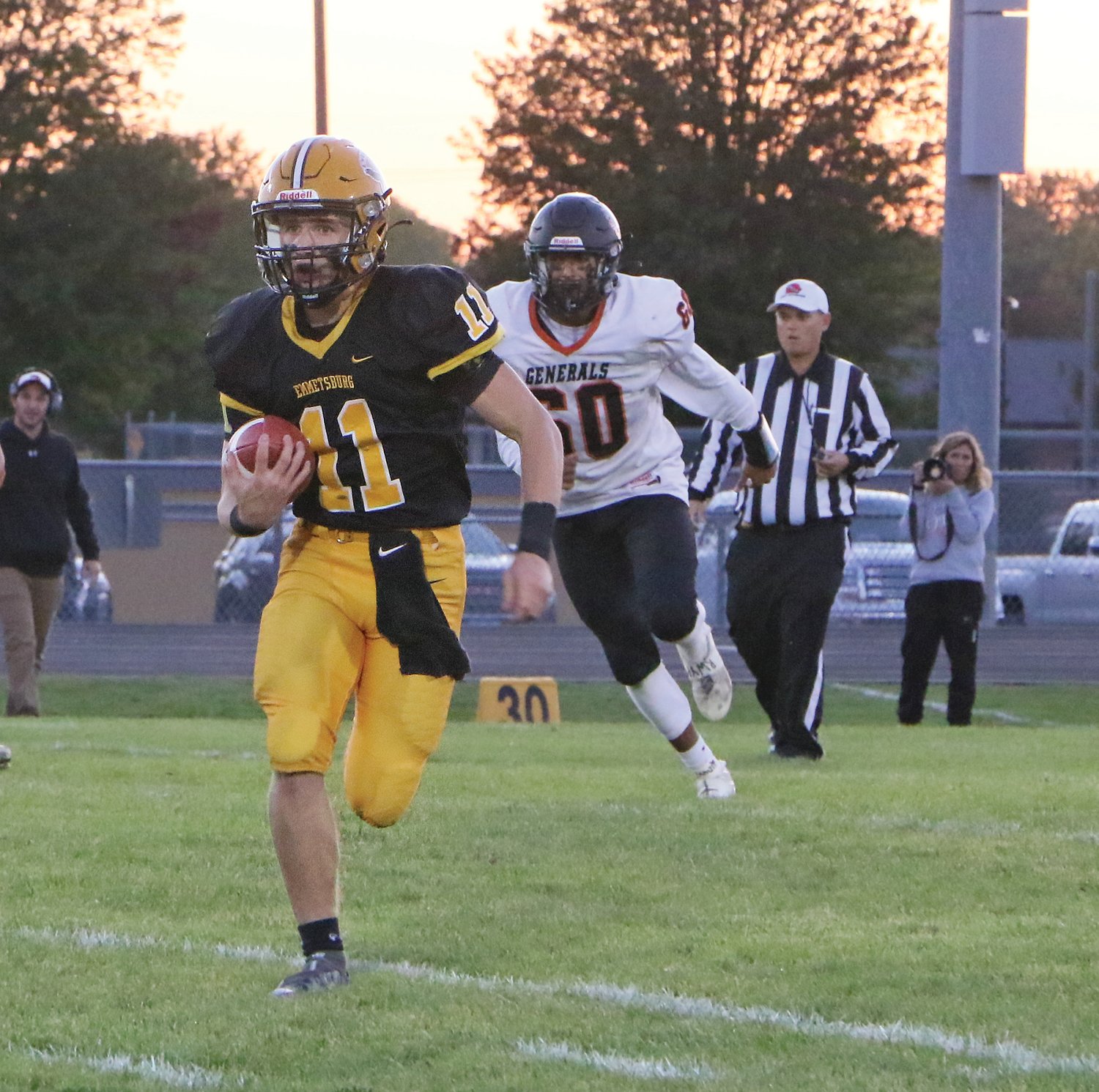 EHS Homecoming week excitement would prove electric on the gridiron Friday, as the E-Hawks dismantled the Generals in a 63-21 victory. From the first whistle, a palpable energy spread from the athletes on the field and sideline to the fans in the stands, and Emmetsburg made its presence known early and often.
"We were all locked in," said E-Hawk Head Coach Ben Thomsen. "We were not all over the place, not separating on the sidelines. We were locked into the game and working together as a unit and the entire team, along with the fans, came together and got the job done. Everyone was pumped up and that was a big part of our win."
Receiving the ball to start the contest, Emmetsburg would get a quick boost from a solid Seth Freeman return, then Lane Auten would make his mark with a 30-yard carry into General territory. Driving the ball to the 1-yard line, Freeman would score on an end zone burst with barely two minutes off the clock in the first quarter.
"We were locked in from the very beginning," said Thomsen. "Coming out on offense and getting that first drive was important for our guys to know we can drive the ball on [Sibley-Ocheyedan] and get plays going. We were able to get our offense going right away. It's a huge thing for us when we can move the ball and we can have big plays."
The E-Hawks would take the ball back two plays later, recovering a Generals fumble and piecing together another scoring drive punctuated by a Freeman 11-yard touchdown dash. A Brennan PAT would make the score 14-0.
Though the Generals would score with 4 minutes left in the first quarter, Emmetsburg would answer with three consecutive touchdowns of their own. In the final minutes of the quarter, Brennan would hit the end zone on a 22-yard keeper, while Freeman would score on a 4-yard dash up the middle following another Generals fumble early in the second, and again at the 7-minute mark, finding open field and carrying the ball 76 yards for the touchdown.
With three minutes to go in the half, Sibley-Ocheyedan would find an open receiver on their next possession for a 42-yard touchdown. However, Emmetsburg would answer yet again, driving downfield on the legs of Auten, Cade Shirk, and Freeman, until Brennan would find Matt Wirtz for a 6-yard touchdown catch with seconds left on the clock and enter the break up 42-14.
"Turnovers that we got were a big part of the swing of the game," said Thomsen. "We were able to get some turnovers early and convert them into points. I think that is probably the biggest takeaway from this game - having success forcing turnovers and turn them into points."
The second half would immediately see another big E-Hawk forced turnover, with Keegan Joyce intercepting a Sibley-Ocheyedan 3rd & 4 pass at the Generals 23-yard line. Freeman would then carry the ball to the 6-yard line, where Brennan would score on a keeper and kick the successful PAT to give Emmetsburg 49-14.
The Generals would score once more, finding the end zone on a 50-yard pass completion, before the E-Hawk offense would take the field again, with sophomore quarterback Clayton Rubel taking over for Brennan. Though the young Emmetsburg offense would stall in their first go round, their second outing late in the third and early in the fourth quarter would prove successful, with Rubel alternating hand offs to Jace Nelson-Brown and Malachi Douglas for positive yards. Douglas would pick up six on a 6-yard rush early in the fourth.
The Emmetsburg defense would bear down on the Generals, first making a goal line stand midway through the quarter, then forcing a General fumble to allow another Douglas touchdown, a 44-yard end zone sprint, to end the contest 63-21.
"I am super happy for our guys," said Thomsen. "They've worked really hard to get to this point, but we have got to keep going. We are not done. We have a lot of season left to play."
Emmetsburg would put up 570 yards of offense on the night, with four players picking up 100+ yards on the ground. Freeman would tally 142 with four TD's, Douglas would grab 140 with two touchdowns, Brennan 134 and two scores, and Auten 106 yards. Wirtz would score Emmetsburg's only touchdown through the air, collecting six yards.
Wirtz would lead the defense with 12 tackles and a five yard sack, while Ryerson Boevers would force an 8-yard loss and grab nine tackles, with Quentin Ort and Brennan also earning nine.
"It's really under our control to do what we can to try and get some things accomplished the rest of this season," said Thomsen. "We can enjoy this one for now, but we have got to keep working and be ready to go this week."
The 1-4 Emmetsburg E-Hawks will travel to Sioux Central this Friday, facing a tough 2-3 Rebels squad.