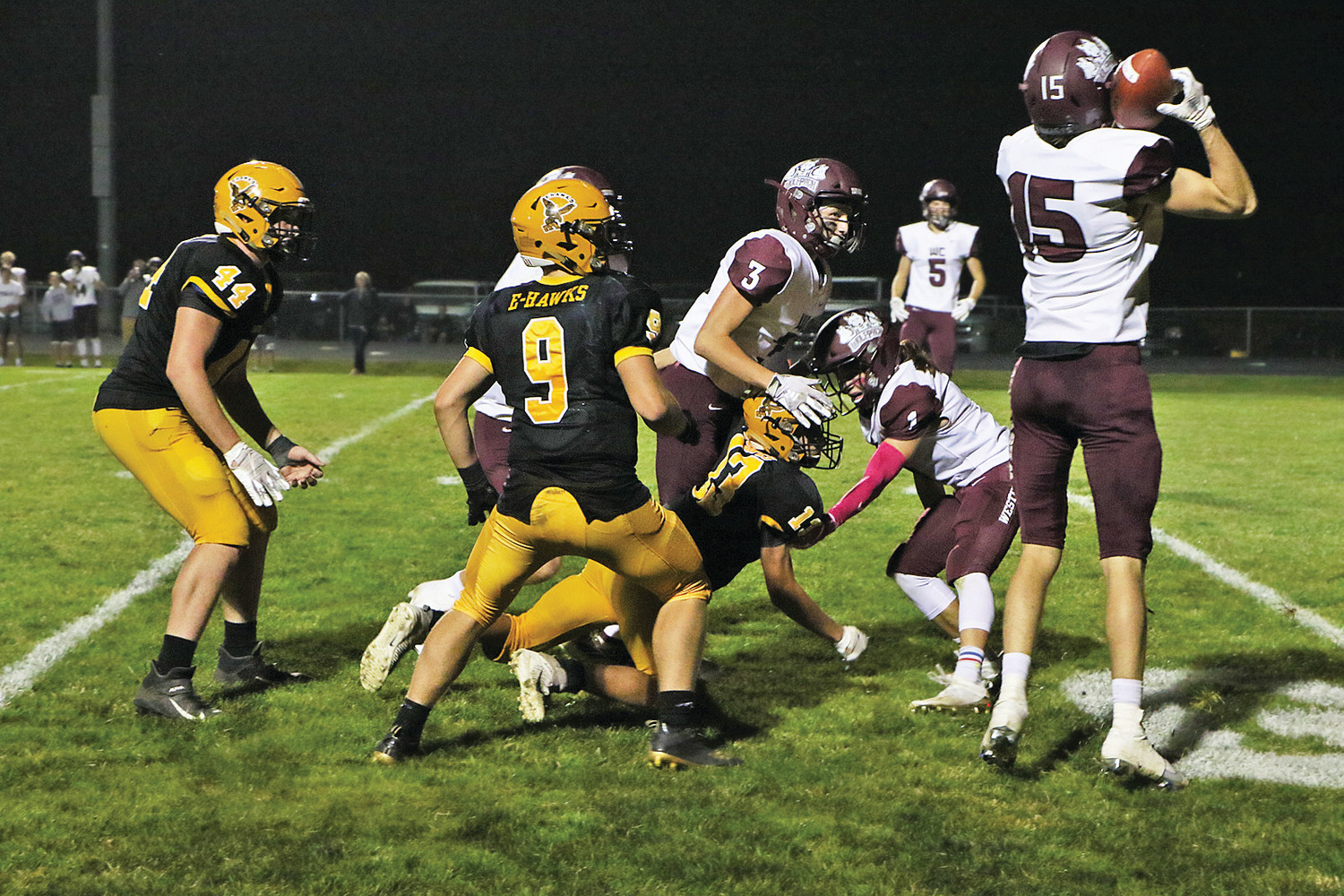 OH SO CLOSE -- With seconds left on the clock and behind by three points, Emmetsburg’s Ben Dunlap would find Cade Shirk at the 5-yard line for a 26-yard pass on 4th & 20. Unfortunately, Western Christian would force the ball loose to take possession and the 10-7 win. Pictured (from left) Matt Wirtz, Lex Kassel, and Shirk helplessly watch as the ball comes to rest in Wolfpack arms. The loss is Emmetsburg’s first this season. -- Joseph Schany photo
Posted Wednesday, October 14, 2020 10:58 am
by Joseph Schany

A hard-fought battle under the lights of Duane Twait Field would end in heartbreak for the E-Hawks Friday night, falling to Western Christian by a field goal in the final minute of play. The 7-10 setback marks the first loss of the season for Emmetsburg, finishing the regular season at 5-1 overall, 3-1 in Class 1A District One.

Both offenses would struggle to move the ball throughout the first quarter. Emmetsburg would fight for every inch in two separate possessions, seeing some success on big runs from Lane Auten for 10 yards and Cole Shirk for 12 yards, but come up short on 3rd downs, forcing the punt.

With the second quarter underway, the E-Hawk defense would clamp down on the Wolfpack and force three consecutive turnovers. The first would see Dunlap pick off a Tyson Boer pass near midfield and carry it to the 23-yard line. After two quick Shirk carries, sophomore Cade Shirk would catch a Dunlap pass for a 14-yard gain down to the 6-yard line. Dunlap would again throw to Cade Shirk two plays later, connecting for the E-Hawk touchdown. A Cade Jacobson extra point kick would give Emmetsburg the 7-0 lead with 8:21 left in the half.

Following the E-Hawk kickoff and an offensive holding penalty, Boer and the Western Christian offense would attempt a pass on 2nd & 21, only to have it picked off by Dunlap at the Emmetsburg 39-yard line.

The subsequent E-Hawk drive would stall due to a holding penalty that would ultimately force a 4th & 3 punt from midfield.

Fielding the ball at their own 18-yard line, the Wolfpack would then pick up 20 yards on three plays before another Boer pass would be intercepted by Dunlap near midfield.

The E-Hawks would again fight for every inch against a stout Wolfpack defense in the final minute of the first half, picking up short gains with runs from Cole Shirk and Dunlap. However, back to back incomplete passes would force a turnover on downs at the Wolfpack 28-yard line to finish out the half with Emmetsburg entering the break with the 7-0 lead.

Western Christian's offense would be first to receive in the third quarter, and the Wolfpack would find success through the air. Starting near midfield, the Wolfpack would drive the ball to the 25-yard line and score on a Boer pass with 8:44 on the clock. The extra point kick would tie the game at 7-all.