E-Hawks Roll Over Eagles in First Round Victory 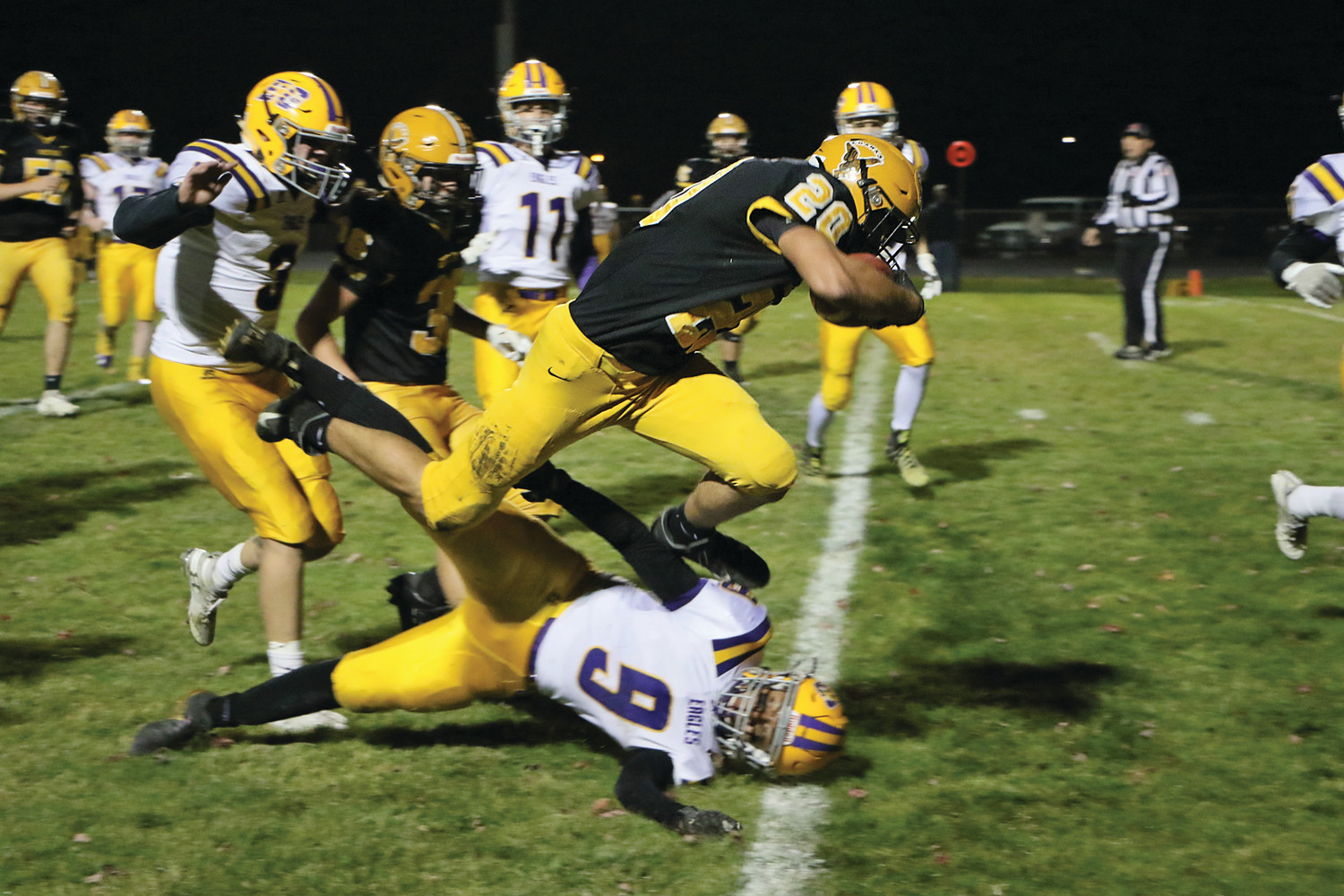 FULL STEAM AHEAD -- The E-Hawk offense dominated the Eagle Grove Eagles Friday night, picking up the 49-6 win during the first round of Class 1A playoffs. The offense rushed for 322 yards. Pictured, Cole Shirk blasts through the Eagles across the goal line for the touchdown. -- Joseph Schany photo
Posted Tuesday, October 20, 2020 10:06 am
by Joseph Schany

The E-Hawks would kick off postseason play with a big 49-6 win Friday night, rolling over the Eagle Grove Eagles in the opening round of Class 1A playoffs at Duane Twait Field.

Emmetsburg would dominate the field offensively, putting up 28 points in the first quarter alone, and scoring on almost every possession in the first half. Defensively, the E-hawks would contain the Eagles to just 130 total yards of offense and force three interceptions and a fumble.

The E-Hawk offense would take first possession of the game. On 1st & 10, Cole Shirk would find a huge hole provided by great blocking up front and run for 50 yards to the Eagle 11-yard line. Two plays later, quarterback Ben Dunlap would hand the ball to Colby Weir for the one yard touchdown. Cade Jacobson would kick the point after for the 7-0 start. Jacobson would be perfect on the night, putting up 7 PAT's.

After a quick Eagle three and out, Emmetsburg's next scoring drive would see Shirk and Weir trade short runs from midfield until Shirk would force his way into the end zone from the 13-yard line.

The E-Hawk defense would force their first turnover on the subsequent Eagle possession, with Jordan Anderson knocking the ball loose on a 1st & 10 run and Wesleigh Plantz recovering the fumble at the E-Hawk 41-yard line.

Lane Auten would then pick up six points for the E-Hawks. Auten would first pick up 20 yards on 2nd & 9 carry to the 22-yard line, then dash for nine yards two plays later for the touchdown, making the score 20-0 with 3:33 left in the first quarter.

After another three and out by Eagle Grove, Emmetsburg would again drive the ball to the end zone from midfield. Dunlap would connect with Ryan Brennan for 34 yards, followed by an Auten 28-yard carry for the touchdown with 42 seconds to go in the first.

The E-Hawk defense would clamp down on Eagle Grove and force a loss of yards on the next two plays, until a 3rd & 12 pass attempt would be picked off by Anderson at the Eagle 26-yard line, then carried to the 14-yard line.

With the Emmetsburg offense back on the field, Lex Kassel would catch an 18-yard burner from Dunlap on 1st down. Weir would score on the next play, running for six yards for the touchdown.

The subsequent Eagle possession would lead to another E-Hawk interception, with Dunlap catching the ball at the 30-yard line and running it back near midfield.

For the remainder of the half, Emmetsburg would see gains on runs from Ryerson Boevers, Seth Freeman, and Nic Lowe. Lowe would pick up almost 20 yards, including a 13-yard burst for a first down. The E-Hawks would enter halftime up 36-0.