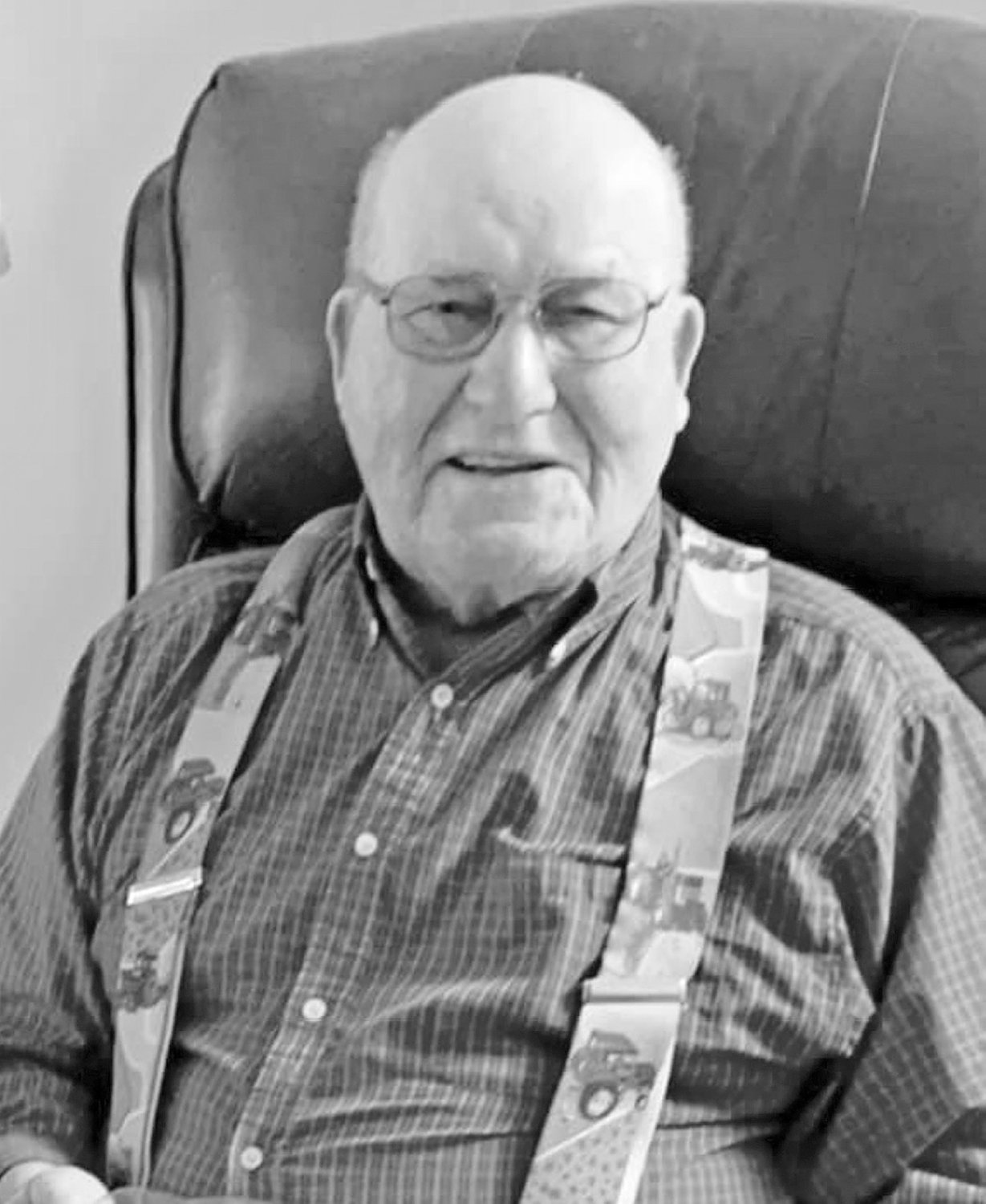 Funeral service for John Miller was held January 12 at Bethel Lutheran Church in Graettinger. The Rev. Pastor John Wolf was the officiant. Burial took place at St. Paul’s Lutheran Cemetary. In lieu of flowers, memorials are preferred to Bethel Lutheran Food Pantry or to Bethel Lutheran Church for updates.
John E. Miller was born on the family farm near Rodman to E. Dale and Helen (Farmer) Miller on Dec. 30, 1935. He passed away at Palo Alto County Health System in Emmetsburg on Jan. 9, 2023, at the age of 87.
John graduated from Rodman High School. Following high school, John started farming. He met his lifelong love, Carol Torreson, at the skating rink in Emmetsburg. He was allowed to put 100 miles a week on the family car while dating Carol, but he figured out how to fudge that by removing the odometer cable so he could make as many trips as he wanted from Rodman to Graettinger to visit her. He was united in marriage to Carol on May 26, 1957, at St. Paul’s Lutheran Church in South Walnut Township, Graettinger. The couple began their life together farming west of Graettinger. They raised four girls on the farm. Every Sunday, the whole family would pile into the car and drive around to check crops, always listening to polka music! The girls hated it, but John always played the same New Ulm station. John continued to farm crops, raise livestock and drive truck until his retirement in 1995. Following his “retirement,” he continued to help the Williamson Brothers (even though he had to downgrade to a RED tractor) in the spring and fall. John and Carol were married for 57 years, and after Carol passed, John missed her every day.
John was a member of Bethel Lutheran Church in Graettinger. He was a familiar face on tractor rides in the area for many years and enjoyed refurbishing and collecting antique John Deere tractors. A picture of John & Carol and their collection of 16 antique tractors was once featured in Iowa Magazine. John enjoyed afternoon coffee with his friends and never missed a chance to give someone a hard time. John always wanted to drive a blue truck in memory of his nephew, Tommy Duhn. When the grandkids were little, they loved riding in “Grandpa’s Little Honey’s Wagon” in the Graettinger Labor Day parades. John never showed much emotion, but underneath was a soft heart for his family that he loved dearly. He spent a lot of time cheering on his grandkids at their activities and was very proud to be a great-grandpa. He always wanted to make sure he had pictures of the grand and great-grandkids on his phone so he could show off his family.
John is survived by his four daughters, Laure Miller (friend Bud Lickteig) of Emmetsburg, and her son, Austin (Emma) Oppenheimer; Barbara (Kevin) Brewster of Stevens Point, Wisconsin and their children, Marlicia (Jerrad) Larson, and Ethan Brewster; DeeAnn (Rick) Bates of Estherville and their children, Jessica (Chad) Day, and Molly (Adam) Hamilton; Sandy (Steve) Clayton of Estherville and their children, Sarah Clayton, Christa Klingbeil, and Joe Clayton; and nine great-grandchildren; Chancey, Creed, Korban, Truitt, Jack, Knox, Kylah, James, and Caleb. He is also survived by his siblings, AnnaBelle (Hinz), Lavonne “Bonnie” (Al) Riggert, Jenese Truelson, Ruth Miller, Mary Petersen, and James (Linda) Miller, along with in-laws, Helen Hansen, Ruth (Marvin) Duhn, and Vicky Torreson and many nieces and nephews.
John is preceded in death by his parents, his beautiful wife Carol, his grandson-in-law Kevin Klingbeil, his brother Lloyd (Lavonne) Miller, brothers-in-law Jay Hinz, Marlon Truelson, Pete Petersen and Vernie Hansen, along with Vernon (Alice) Torreson and Donald Torreson.
Arrangements were made by Henry Olson Funeral Home.
Condolences can be left at
www.henryolsonfuneral.com